The pen train! I always like train rails and their perspectives. Sometimes, in our school train, we have to push hard by ourself and sometimes, try more hard than we can do. In the other way, like a train, when we start rolling it’s difficult to stop. We always want more and more. Like a photographer I feel the same, I want to up a little more each photo I take. 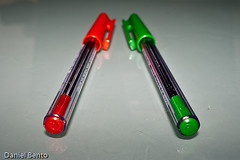 Red and Green Pen are useful pens, but for someone that only likes do write in black/blue… having this pens are a waste. But, most of my non black/blue pens comes in packs with the black/blue ones and I buy them because they are cheaper!

The begin of my day was a little stupid… the social services are to slow… they talk so much and do so little. But after all, the situation makes me think about actual statistics of unemployment. Most of the people there don’t want to work, it’s true! I found people saying “I had a job, but I quit and came here because… I don’t want to work” or “I want to win very much but I don’t want to work hard or learn a job”… People have their life of course, each one choose their path… I prefer to believe in that… But it’s a killing situation for many people on our economical state.

Do something is better than do nothing, but try is a much better position than a passive one.